**Please note. The traditional costumes shown in this article are centuries old, originating from Sicily's Spanish period. While those unfamiliar with this tradition may find it surprising, please be assured that it has everything to do with reverence and respect and nothing to do with the other thing you may be thinking of. 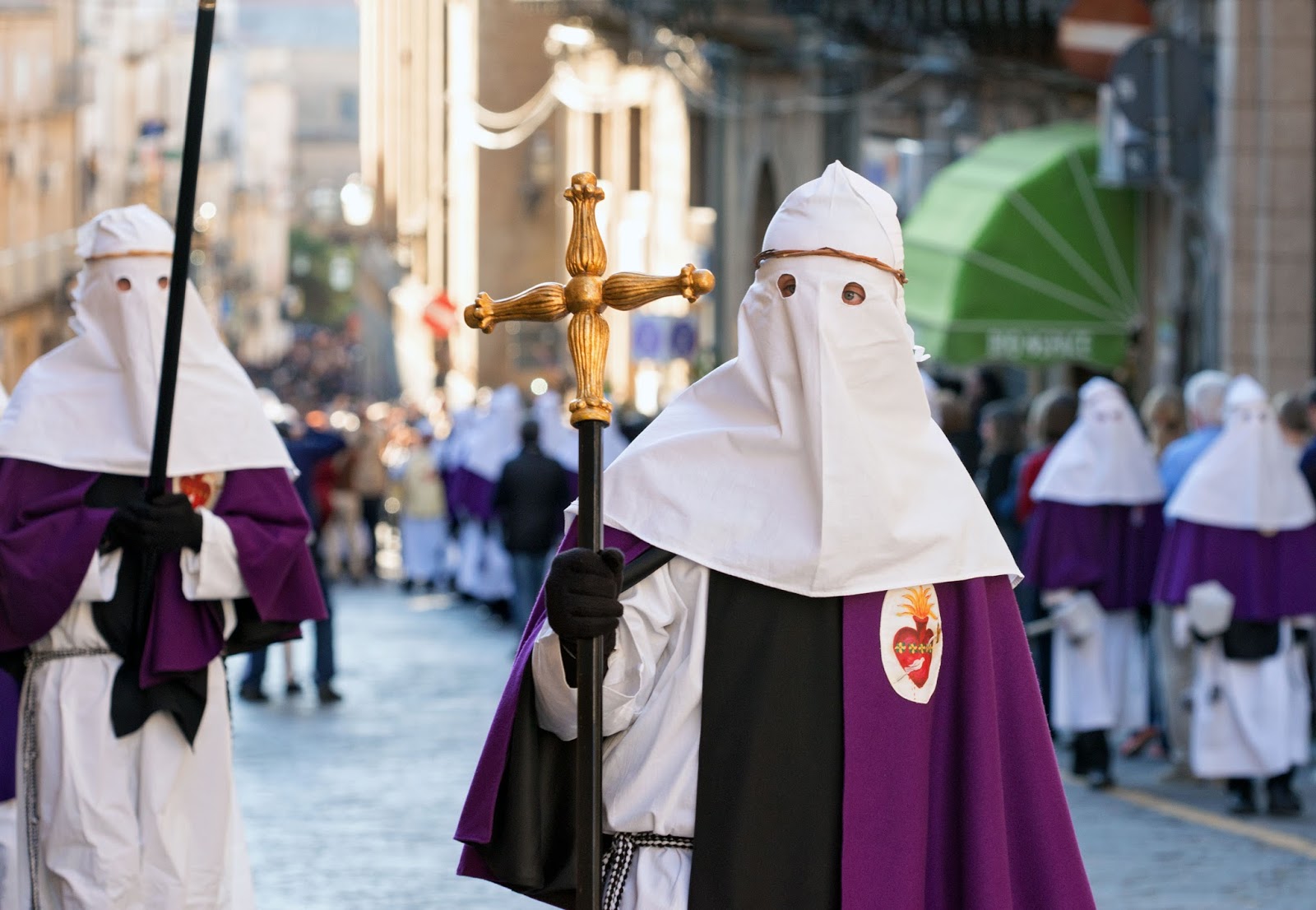 As soon as I touched down in Palermo, I had one thing on my mind. I needed to make it across the island in time to see the famous Good Friday procession in Enna.

Having spent Holy Week in Rome several years ago, I knew Easter in Sicily would be a grand affair. I had no idea, however, I was in store for the most heartfelt and touching display of faith, culture and tradition I had ever witnessed.

Every town on the island celebrates Holy Week with reenactments of the Passion and Death of Christ, each with their own unique and ancient traditions. The festivities begin on Palm Sunday and climax on Good Friday with attendance from the entire communities and visitors from around the world.

Enna arguably has the most elaborate and profound Good Friday procession of them all. The town is divided into 15 confraternities, similar to parishes, and each has their own church and traditional costume. Hundreds of representatives from these confraternities silently march from their respective churches to the Duomo, carrying statues of the Dead Christ and Our Lady of Sorrows, on their shoulders. Then later, parade to the cemetery by torchlight. It's a huge honor to be a participant, the tradition handed down from father to son. 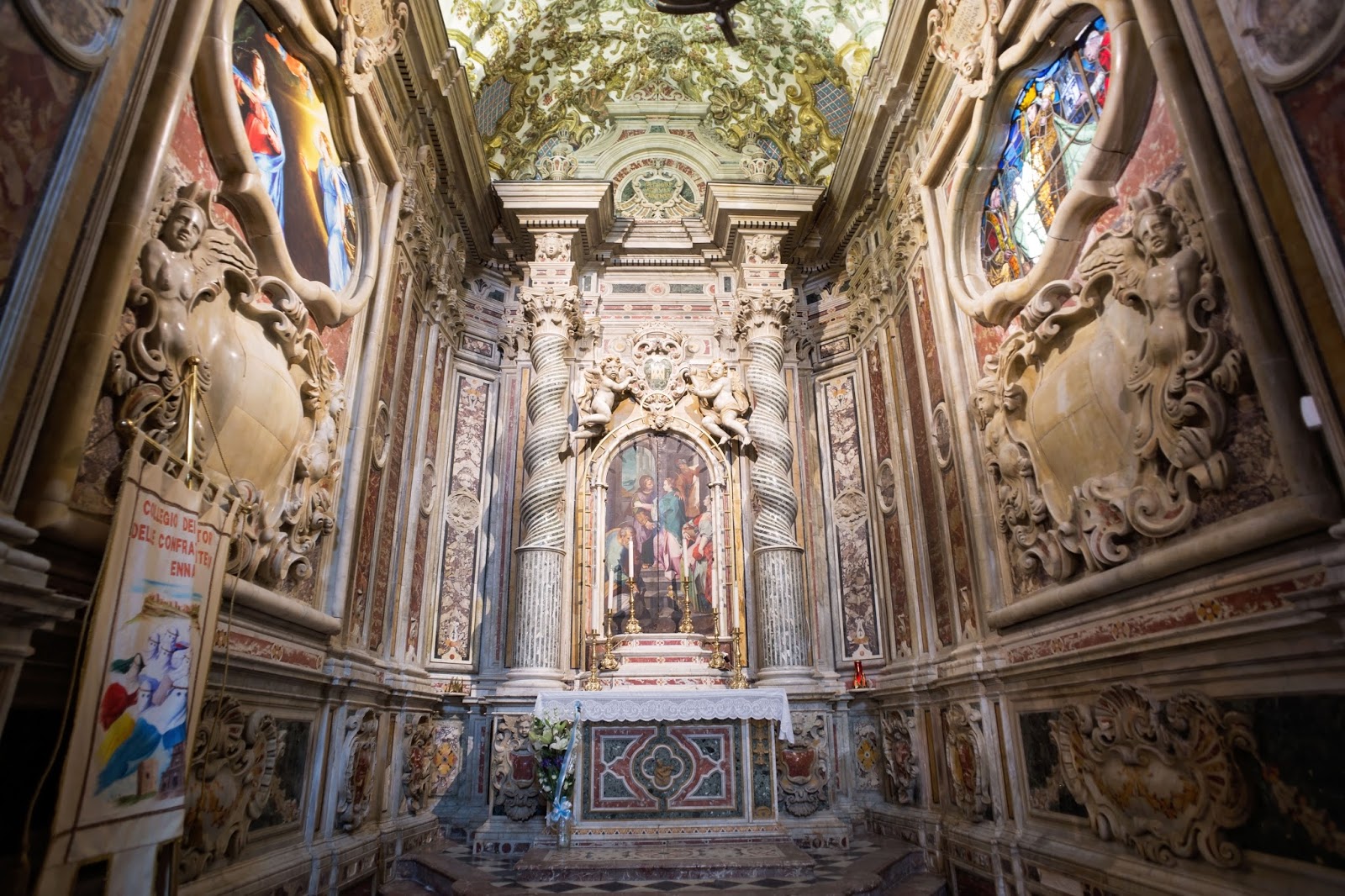 After driving through the countryside, with an endless view of rolling green hills and wildflowers, I arrived in Enna right at 2pm. This was an important time because I knew they were going to start closing the streets then. The road into town is a dramatic drive straight up into the mountains to the highest inhabited point in all of Sicily. It was hard for me to believe such a thriving community has existed up there for literally thousands of years. But then again, lack of accessibility was most likely their goal to defend itself from invaders.

The view of the neighboring village, Calascibetta, from Enna

I was surprised to find a parking space very quickly in an empty lot of a very old cemetery. I had an even bigger surprise waiting for me when I got out of the car…and that was a fantastic view of Mount Etna. White steam was billowing from out of the volcano against a brilliant blue sky. It was hard for me to take my eyes away from the expansive panorama. It’s said, that on a very clear day, you can see to all three coasts. I thought, if I see nothing else on this trip I will still be satisfied. 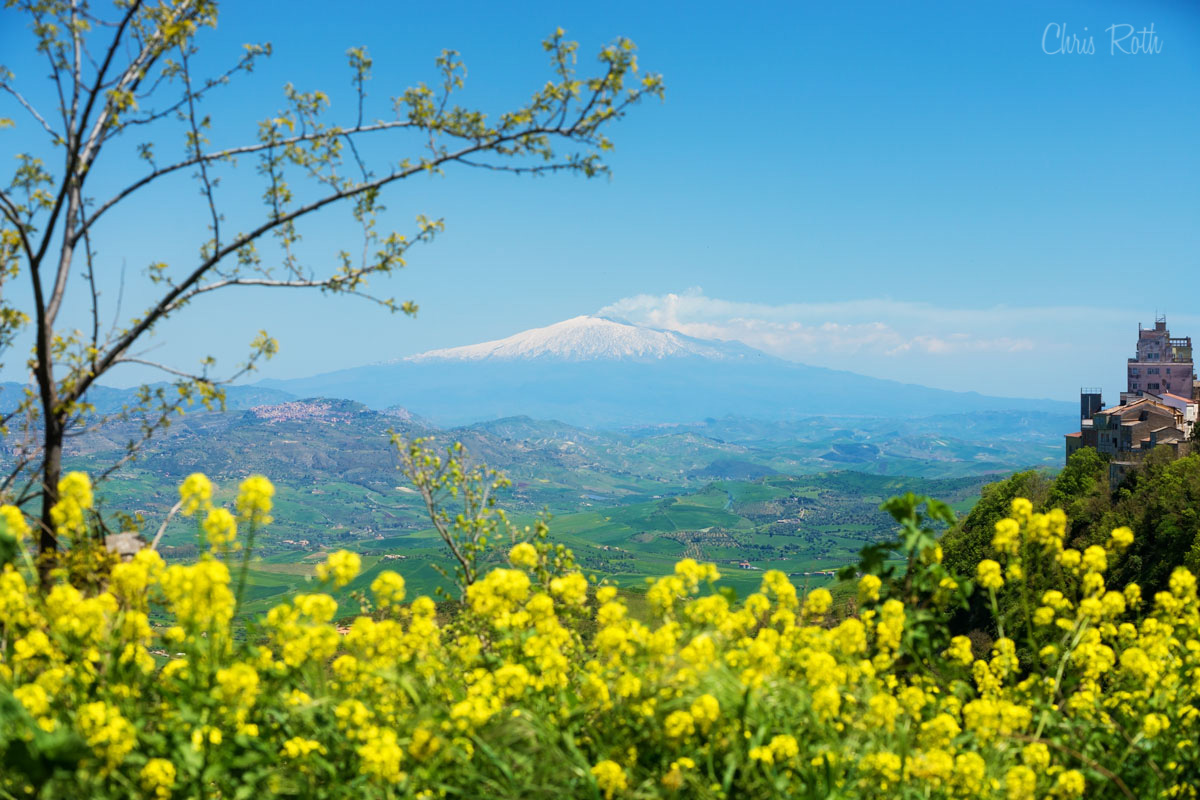 Before I got very far, luckily, I had a conversation with a priest at the cemetery who explained to me (in very broken English) that once the procession started, remaining cars would be towed from that lot. Having the rental car towed within hours of arriving to Sicily would have really stunk, so I was grateful for that bit of divine intervention.

Finally, I was safely parked down the road, and walking to the center of town. Every so often, I passed one of the parish churches decorated for the festivities. Confraternity members gathered outside, dressed in the parish’s traditional colors, while proud family members took photos. 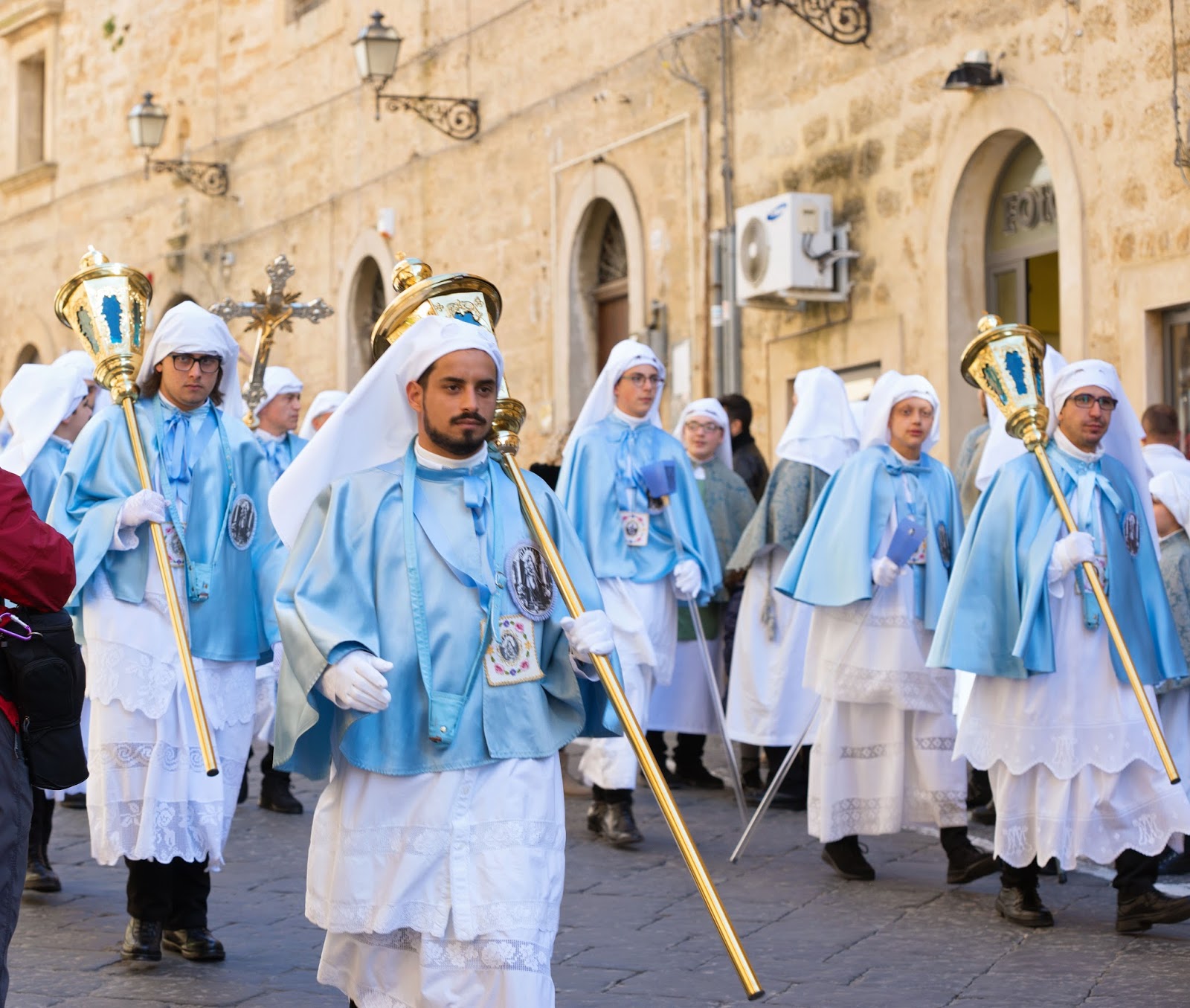 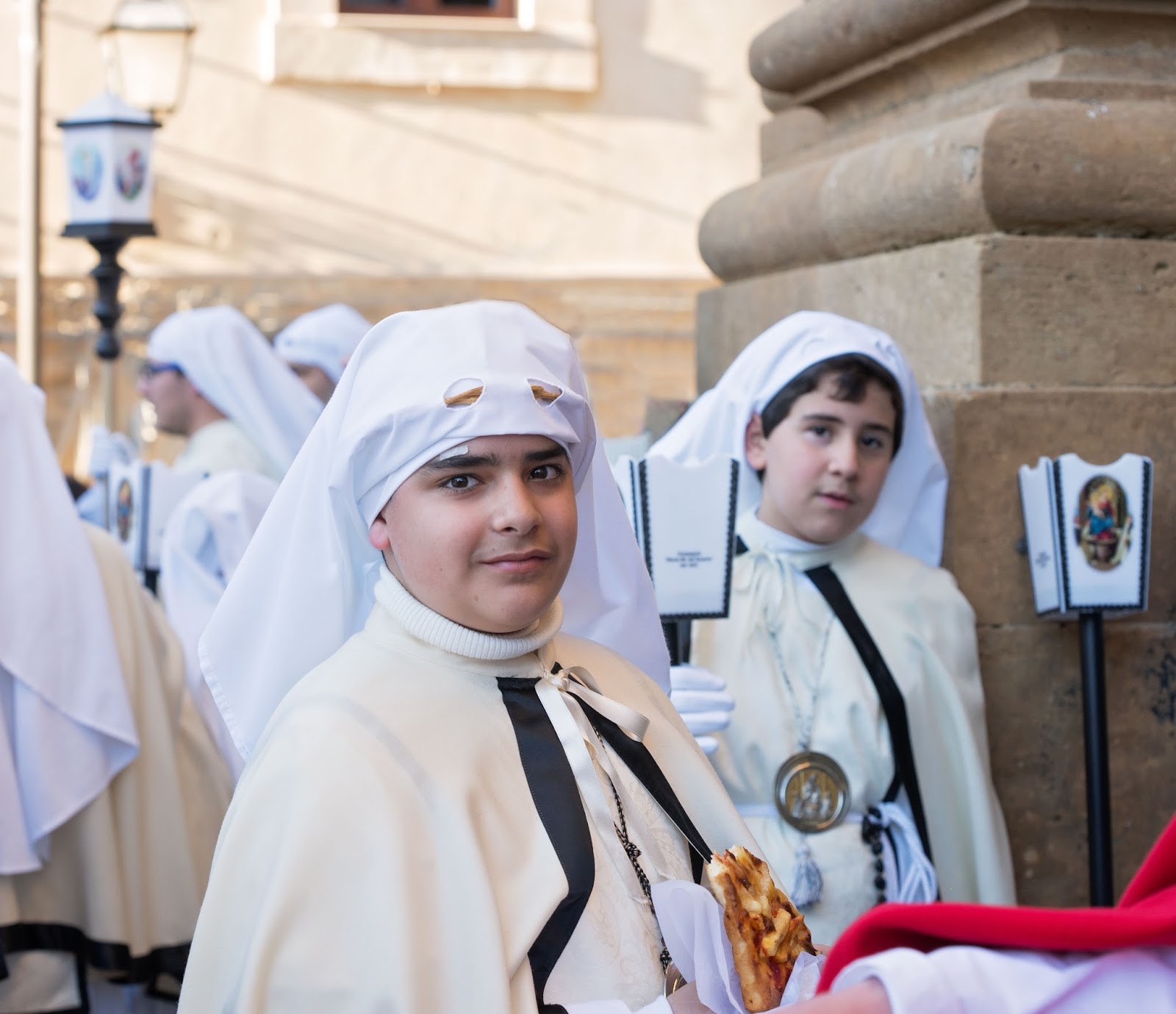 The narrow streets were already filling up with people so I hurried to claim a spot on the top steps of the Duomo, Santa Maria della Visitazione (Saint Mary of the Visitation). The Duomo is the main cathedral where the ceremonies would begin and end. The atmosphere around us was electric with excitement. Onlookers were an interesting mix of locals, tourists and photographers from around the world. Beaming parents escorted young confraternity members to the steps, clearly proud their child was continuing the family tradition. Small children rubber necked around their parents to see if the parade was starting.

Without any introduction, the procession began with the Confraternita del SS. Salvatore (The Brotherhood of Saint Salvatore), the oldest in Enna, established in 1262. Dressed in long white vestments under a yellow cape emblazoned with The Maltese Cross, they marched silently into the Cathedral with the town’s band playing somber funeral music. A few minutes later, dozens of members carefully carried the body of Christ on their shoulders, heaving up the steps and into the Cathedral. You can't help but feel what they feel, the seriousness of the ceremony. It's the funeral of Jesus. And it's been celebrated exactly this way for hundreds of years. 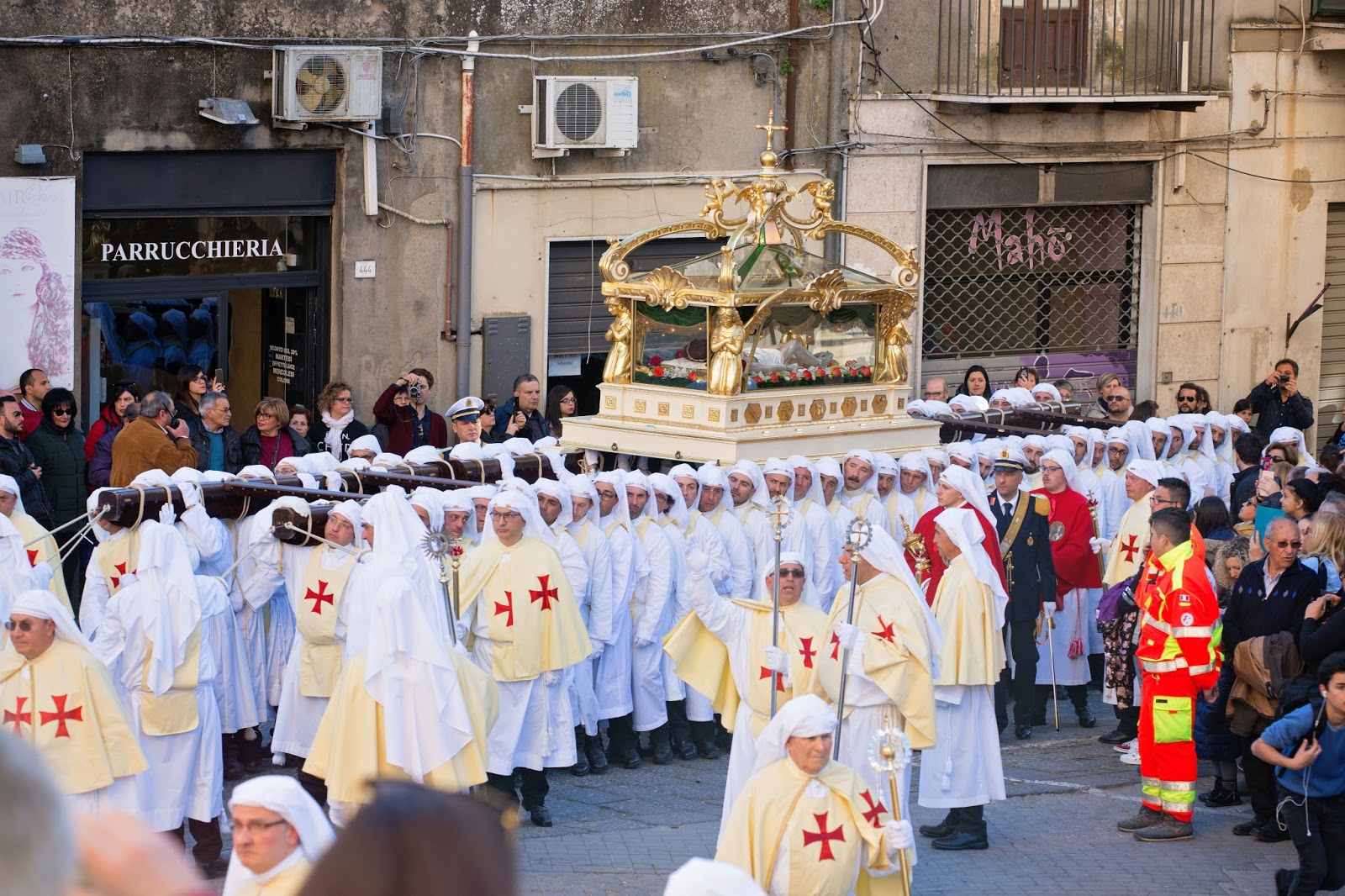 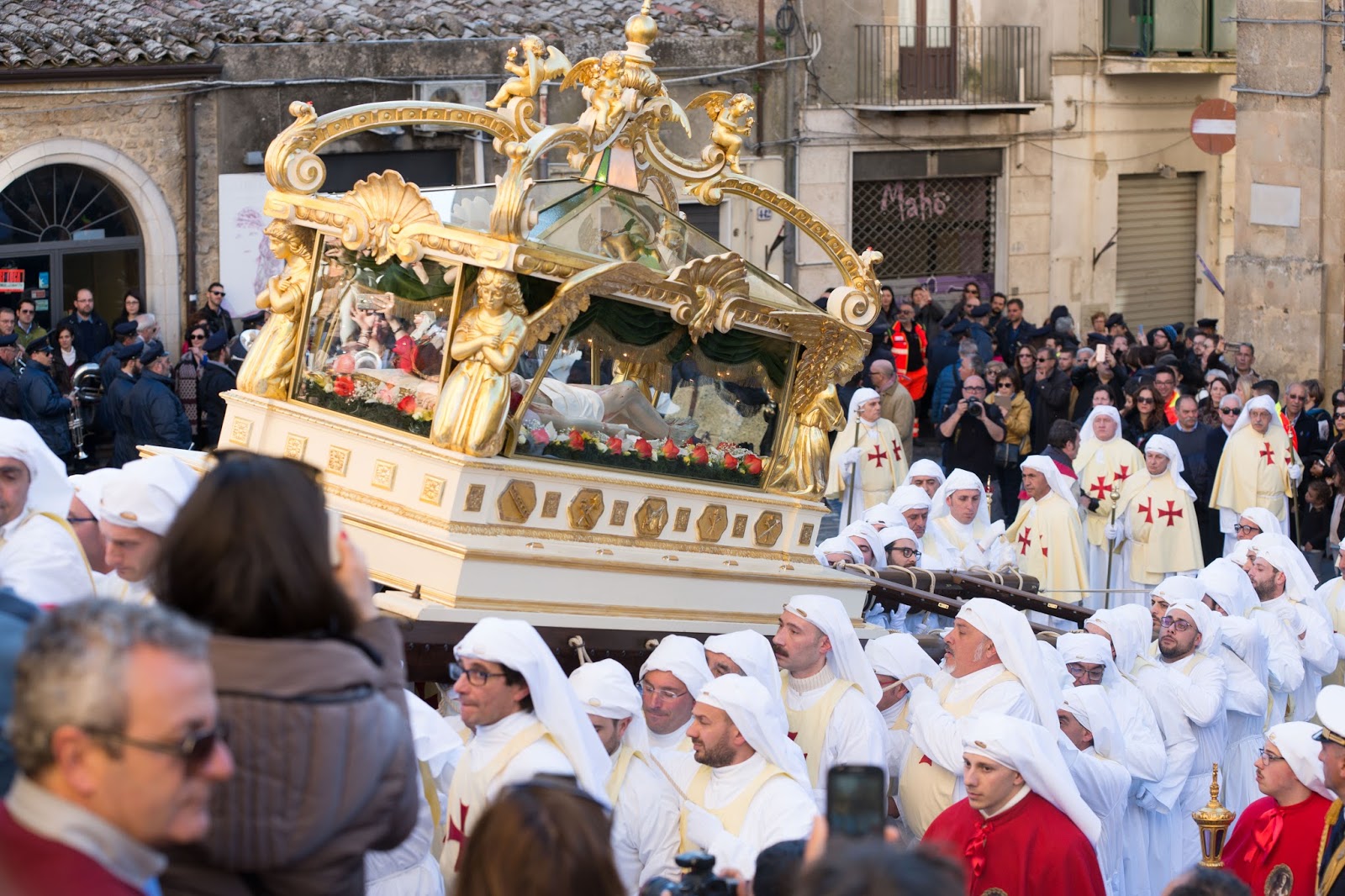 Every few minutes, a different confraternity arrived, each in their own colors and carrying symbols of Jesus' suffering. With the exception of those carrying Jesus or Mary, all the members are hooded. This tradition is the legacy of Spanish domination in Sicily. Some say it’s a sign of reverence or respect for the dead. Others, that it is a sign of penance. Try to imagine hundreds of hoods and cloaks of all different colors marching silently with torches through town. To say it's a dramatic scene is an understatement. 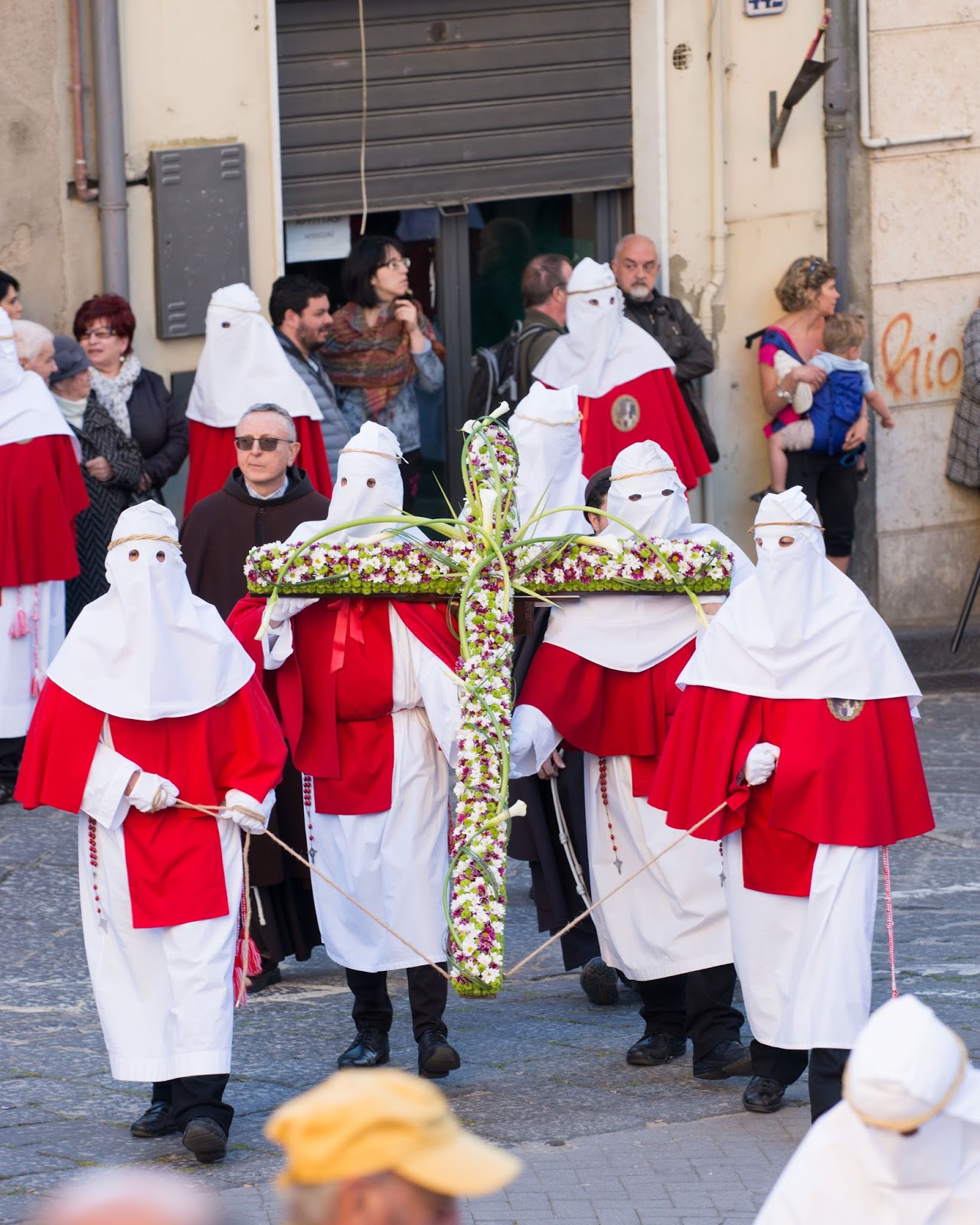 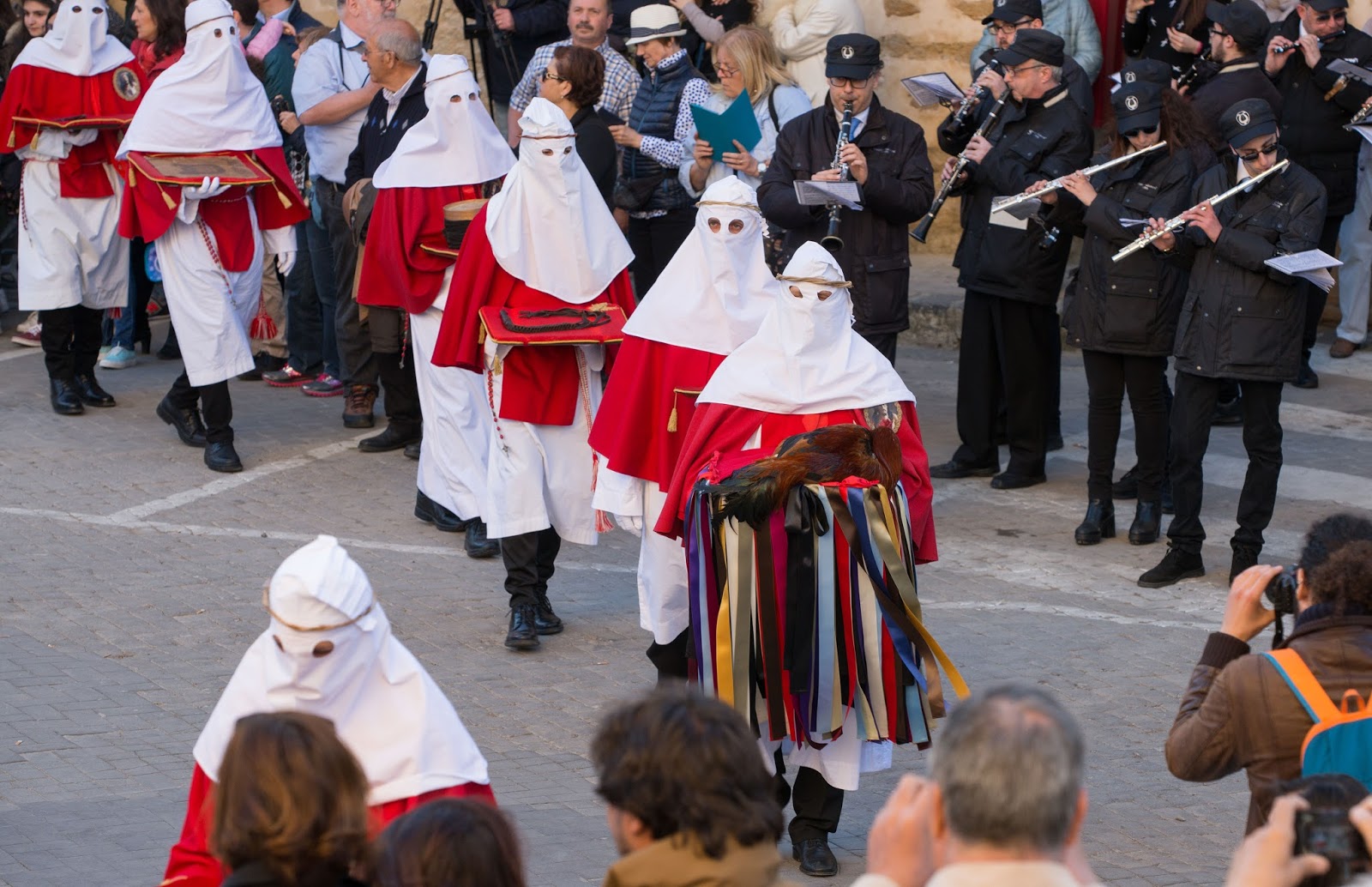 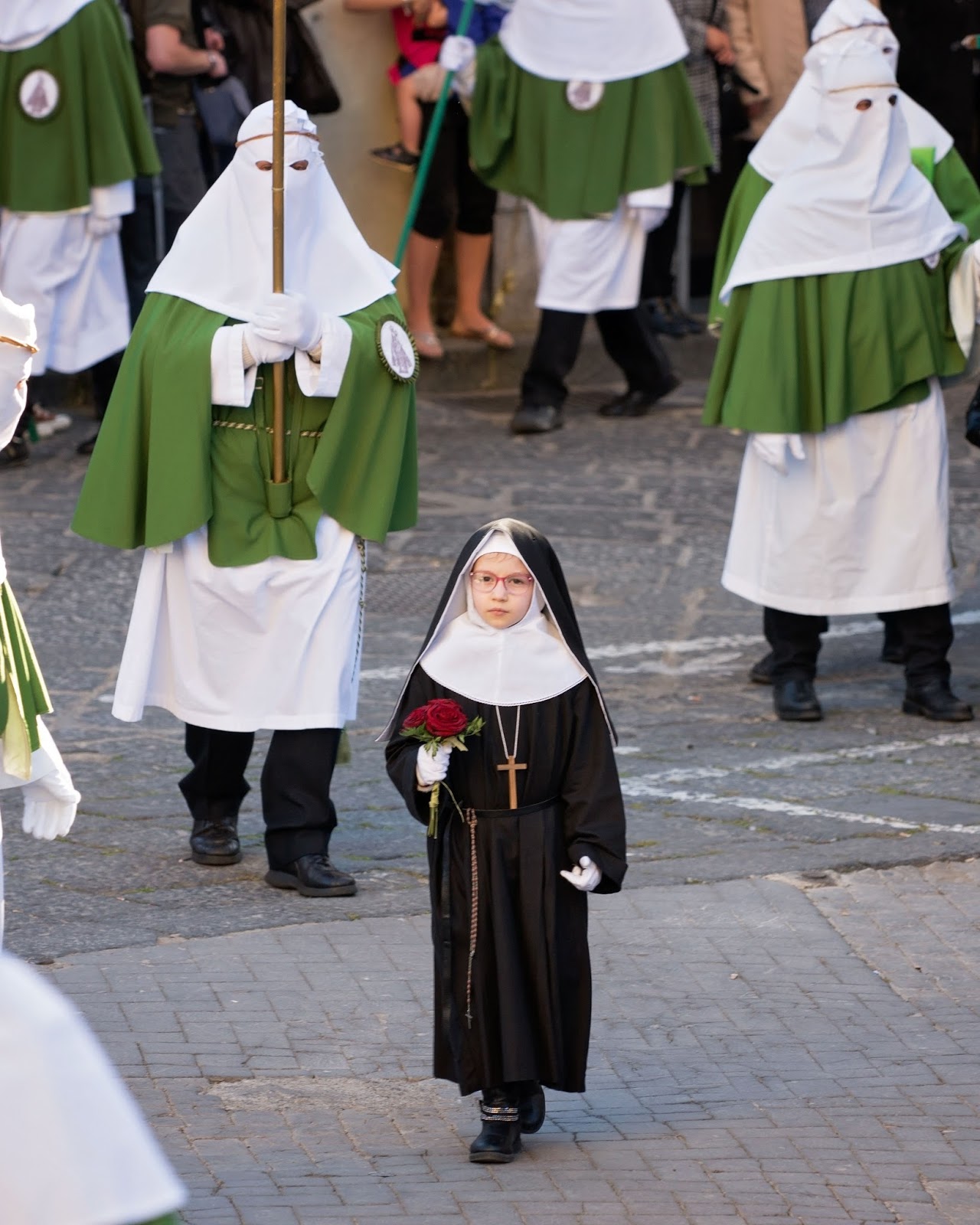 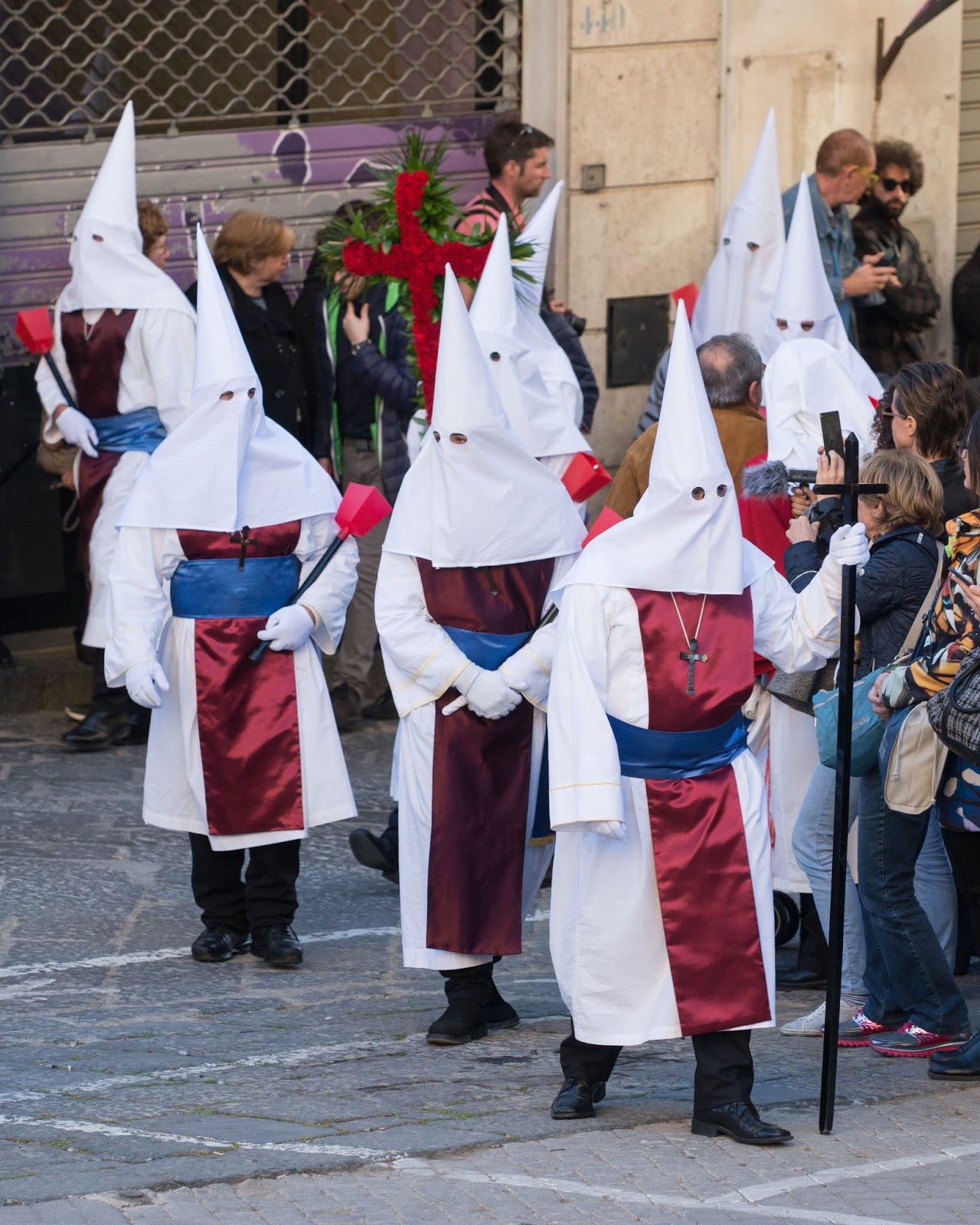 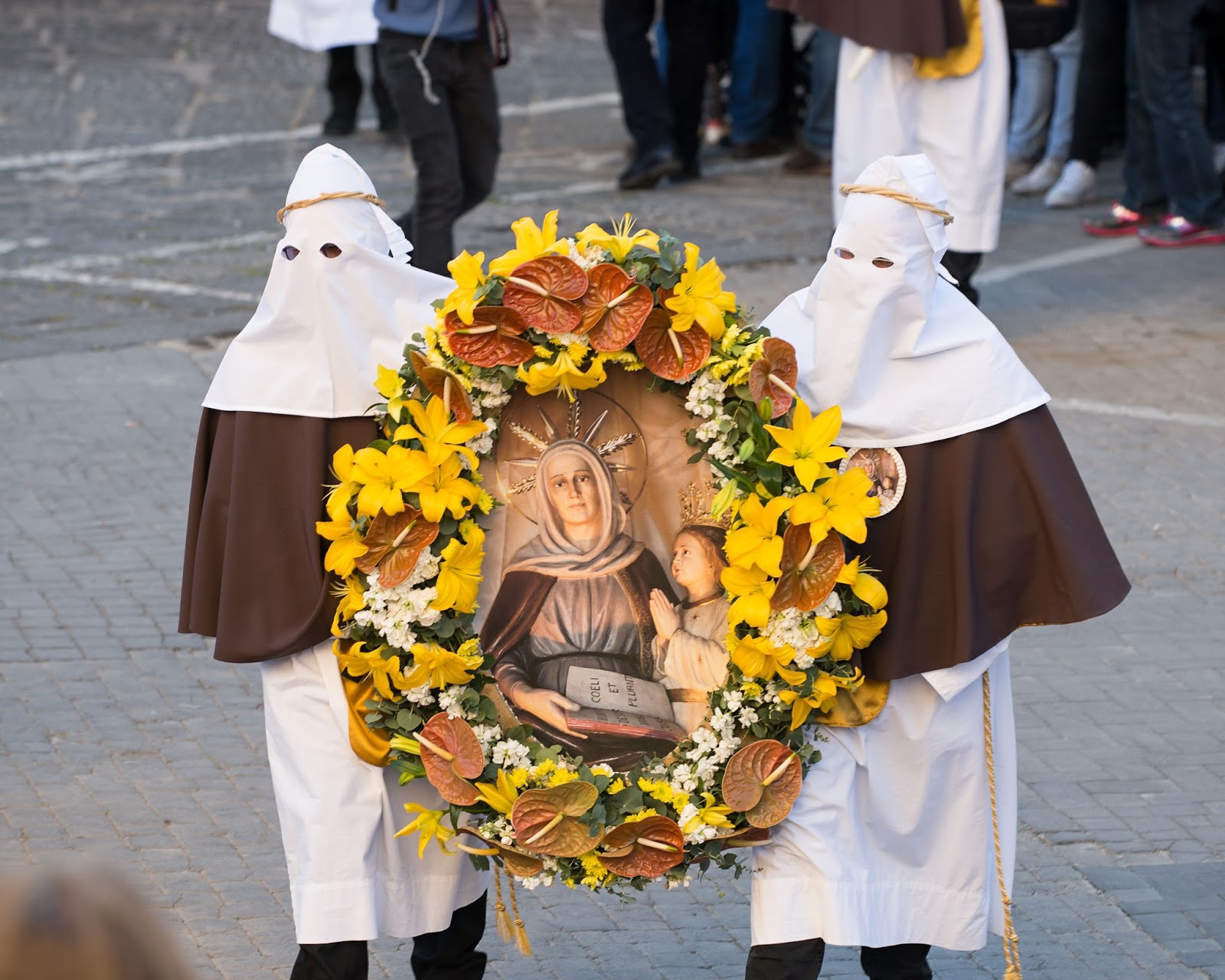 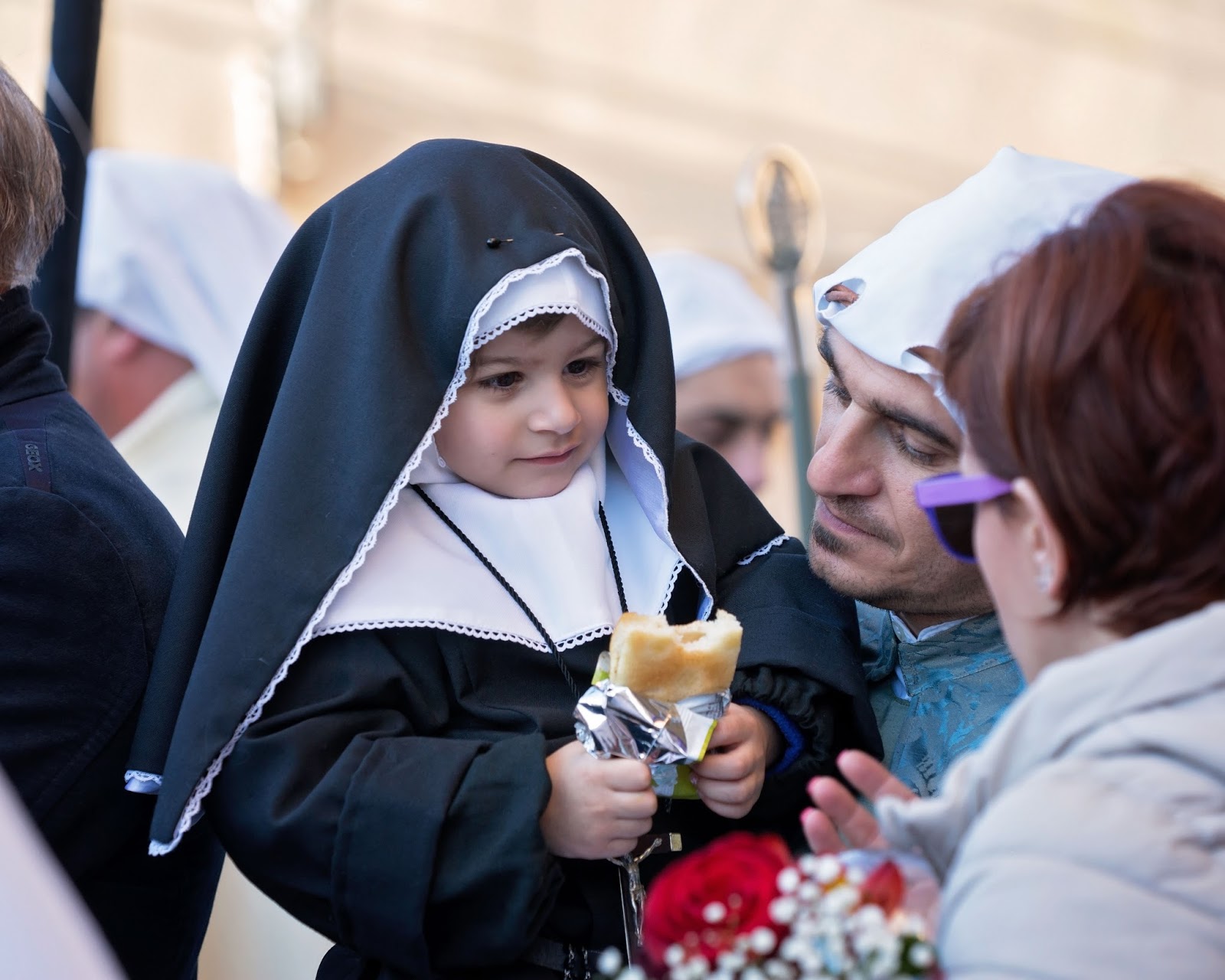 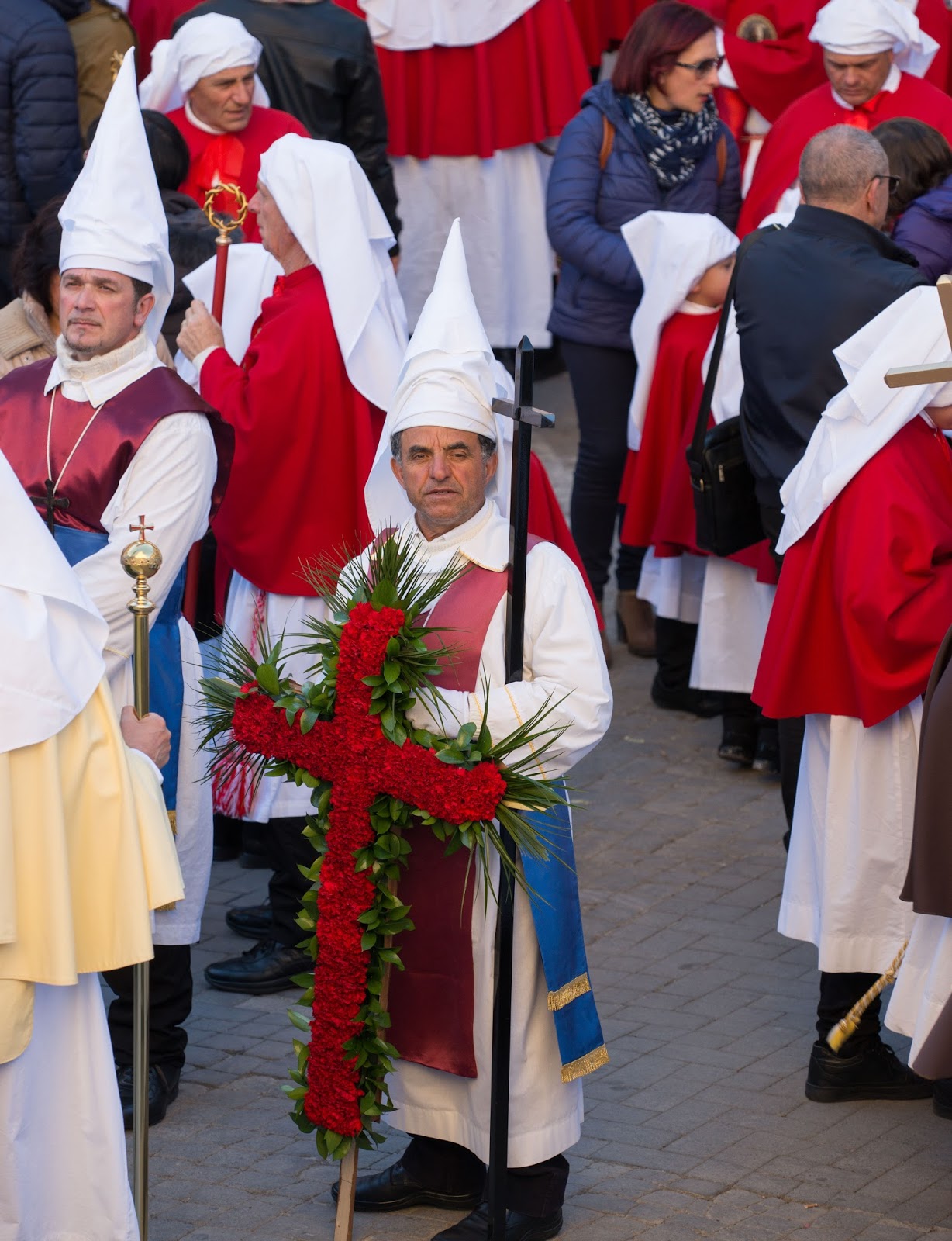 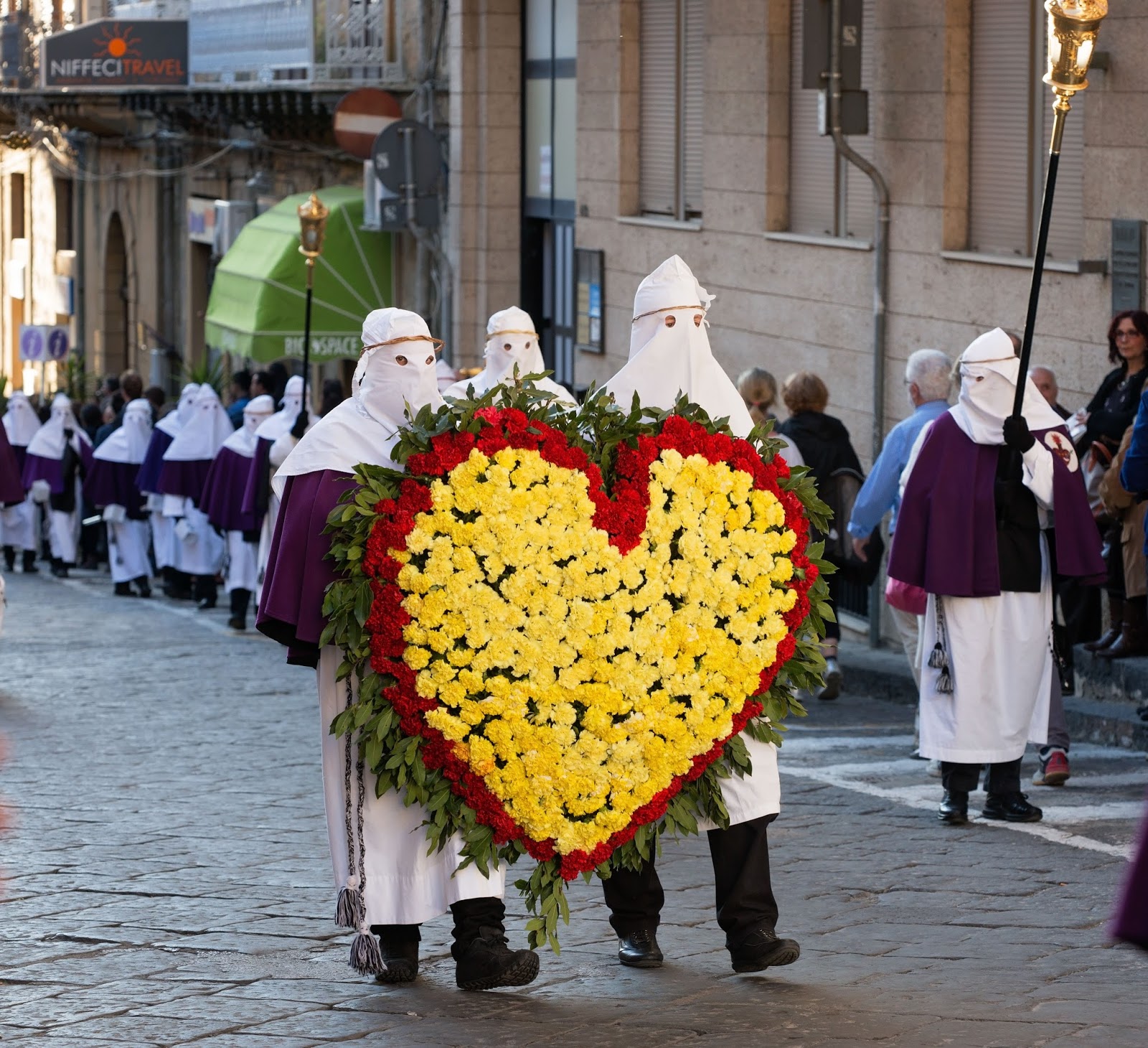 I was staying in Palermo that night and didn’t want to drive through mountainous roads in the dark so I decided to make my way back to the car before the procession was over. Standing on the hill looking down I couldn’t believe what I saw. Throngs of the faithful slowly moving toward me as a solid mass. They were following the procession that was now carrying the grief stricken Mary, recreating the tragedy she experienced. It felt wrong to get in the way of their pilgrimage, so I didn't.

I let the parade pass and I watched as Mary and her followers traveled up the hill. As I walked back to the car I tried to process what I had just witnessed. I believe many people around the world assume this kind of deeply rooted faith and tradition has been lost forever. But it's on full display here, as it has been for centuries and will be for centuries more. I was so grateful to have experienced Good Friday in Enna. 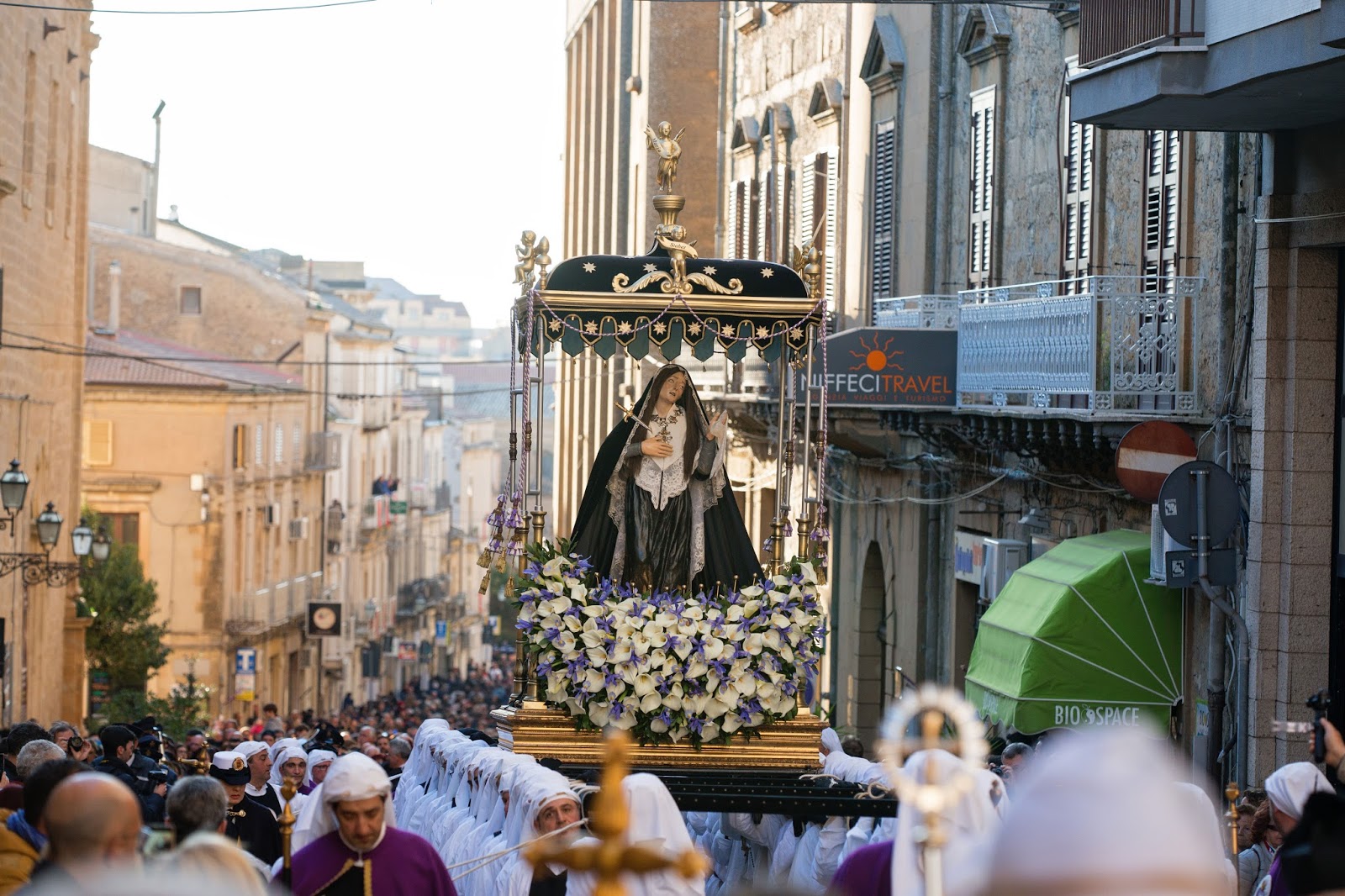 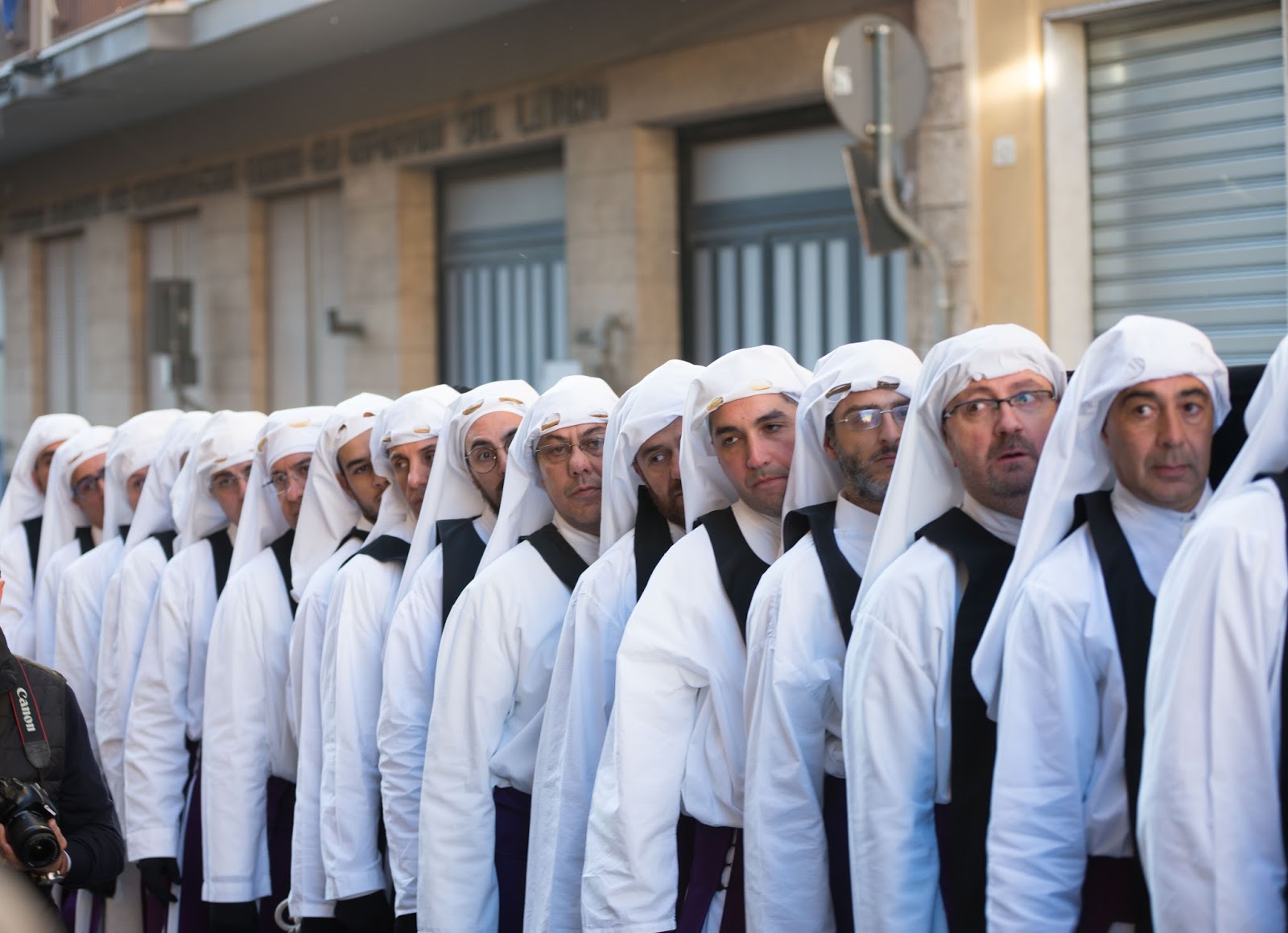 Confraternity members carefully carrying Our Lady of Sorrows on their shoulders.