Dubrovnik, Croatia is one of my very favorite towns in the entire world.  As a matter of fact, it's the first place I recommend when people ask for travel suggestions. It's a magical town that I could visit over and over again.  I dare you not to fall in love with it.

The things that make this town so wonderful, however, also make it popular.  Its fascinating history, iconic fortress walls of the Old Town and clear blue sea draw crowds from all over the world.  And because it's a filming location for Game of Thrones, its popularity has exploded.

TRAVEL TIP: Seriously consider visiting Dubrovnik before mid June.  The weather is mild in April and beautiful in May. It's considered "off-season" and virtually no crowds!

When I planned my first visit to Dubrovnik I was living in Bjelovar, Croatia.   After spending so much time in Central Croatia's lush green countryside, I was less than impressed with the photos I had first seen of Dubrovnik.  The landscape looked rugged and barren.  Where were the rolling green hills filled with wild flowers?

One of the most unique characteristics of Croatia is its diverse landscape due to its boomerang shape. Known as the country with a thousand islands, it's western border is made up of 1100 miles of sunny coastline along the Adriatic Sea. 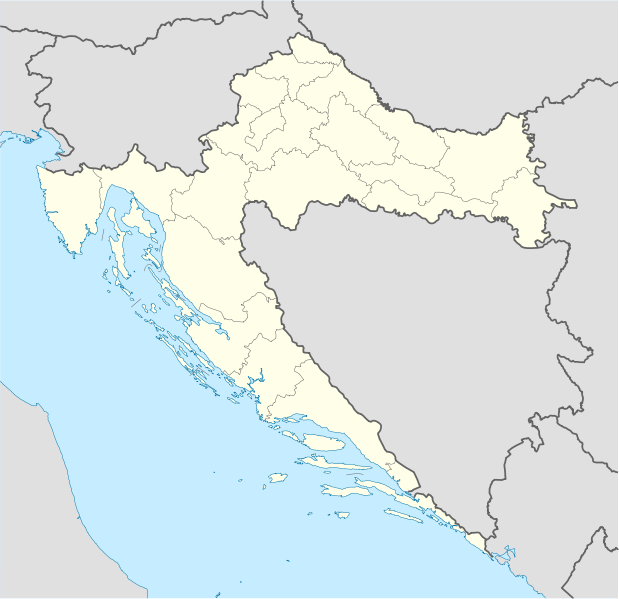 There are mountains in the north, hilly countryside in the center and plains in the east.  In between, are eight national forests with a couple of world famous waterfalls. If you drove the perimeter of the country you could cross borders with 5 different countries.  You can even drive in and out of Bosnia and Herzegovina in less than ten minutes but only driving in one direction!  (a six mile stretch of Bosnia and Herzegovina extends down to the Adriatic Sea, dissecting the Croatia border just north of Dubrovnik)  If you only visit one area of Croatia you will never get the full flavor of the country.  This is what happened to me and I almost missed out on one of the best experiences of my life!

Briefly, I had considered traveling to Dubrovnik by train or bus from Zagreb. Because Dubrovnik is on the southern tip of the country, a bus or train would have taken the entire day. (Remember the boomerang shape?)  Croatia Airlines has daily non-stop flights that only take about 50 minutes. I do love to travel by train but I didn't want to give up two days of travel time.

The Dubrovnik Airport is about 30 minutes outside of the main town.  Comfortable shuttle buses regularly run between the airport and the city for a reasonable price of 40 Kuna ($7).  Of course, if money is no object, over-priced taxis can take you as well.  The 30 minute journey offers great views of the bright blue sea on one side and the Dinaric Alps on the other.  The bus lets out at the famous Pile Gate (pronounced Peela) of the Old Town where you can transfer to another bus or taxi to your final destination.  My instructions were to transfer to the #8 bus and get off at the Biker Bar.  I am not making this up.

Public transportation is not everyone's cup of tea when traveling.  I get it.  You just want to take a taxi and get there already!  But I LOVE commuting with the locals. It's a priceless opportunity to absorb their culture, learn the language and make new friends. Most times, I just sit in silence and observe.  It's those observations that will stay with me always. Having said that, the public transportation experience can have its challenges.

It appeared to be rush hour when I transferred to the #8 bus.  The traffic was thick and the bus was packed with commuters.  With every stop we got a little more squished.  This made it difficult to see out the window to look for my stop. The drivers do not announce when you approach a stop so you must pay attention and know when to get off. When I spied a sign for the Biker Bar, I tried to make my way up to the door with my luggage to get out.  For a moment, I panicked that I would not get off in time but I finally made it out.  If it was a cartoon, I would have made a loud pop as I squeezed my way out the door.  At that moment, it dawned on me that it only took 50 minutes to fly from the other side of the country but it took over an hour to go about 3 miles on this bus. I still wouldn't have done it any other way.

The view from my balcony!

As the #8 drove away, I took in the incredible view.  We were high up in the hills overlooking the Old Town.  With a bit further to go, I continued climbing up the path, dragging my luggage behind me.  Finally, I arrived at my bed and breakfast where the owner, Dijana and her 2 year old son Marko were waiting to greet me. She showed me to my room which she had upgraded (for free) so I could have a better view. Holy cow, it was fantastic! My breathing was still heavy and my heart was still pounding from the walk uphill but I hardly noticed.  Staring out the window, I thought this must be the best view in all of the city. Dijana asked me if I wanted coffee. I should have known that it was really a rhetorical question.  No one refuses coffee in Croatia, except me apparently.   "No coffee??" she asked incredulously. Silly me, for a moment I forgot where I was. Of course, I'll have coffee. And of course, it was Turkish. She returned with a lovely tray of coffee, sugar, milk and chocolate. When she wasn't looking, I poured the entire container of milk into the coffee, careful not to stir up the coffee grounds from the bottom of the cup.

TRAVEL TIP: Never assume bed and breakfast hosts in Europe take credit cards. Most do not. Some shops and restaurants only take European debit cards.  Just because you see a credit card machine on the counter or a credit card logo in the window doesn't mean your American card will be accepted.  Make sure you have plenty of cash on hand.

Dijana provided me with a map and told me the important places to see and recommended good restaurants. After she left, I put my running shoes on and traveled down the 340 limestone steps to the Ploče Gate of Old Town. I've lived in Europe twice now, visited a lot of places and seen a lot of amazing sights but I wasn't prepared for what happened next.  When I passed through the fortress walls into the main square I became overwhelmed with emotion. With my hand over my mouth, I tried to hold back tears. Every single thing my eyes landed on was amazing. Not knowing what to look at first, my head kept spinning around. The Church of St. Blaise, The Dubrovnik Cathedral, Gothic architecture, hundreds of coffee drinkers lining the Stradun were all competing for my attention.

The first half of the day, I spent investigating each of the major historical points inside the walls. Practically every structure was originally built over 1000 years ago. Much of it has been rebuilt due to a 17th century earthquake, an 18th century fire and a life time of damage from various enemies. Each time a structure was rebuilt Dubrovnik would be under a new regime and a different architectural period. So there is this great mix of Byzantine, Romanesque, Gothic, Renaissance, Baroque and Ragusan styles. Each added their own unique flavor to this eclectic town.

The second half of the day I got lost (on purpose) in the maze of alleyways that make up the residential section of the Old Town. The pathways are narrow with high walls going up and down steep stairways all made from stone. With each turn onto a new alley I fell more and more in love with the city. Colorful laundry hung outside of windows and lush green plants decorated the entrances. I think this was my favorite part.

When I can no longer ignore my hunger, I set out to find a restaurant from Dijana's suggested list. 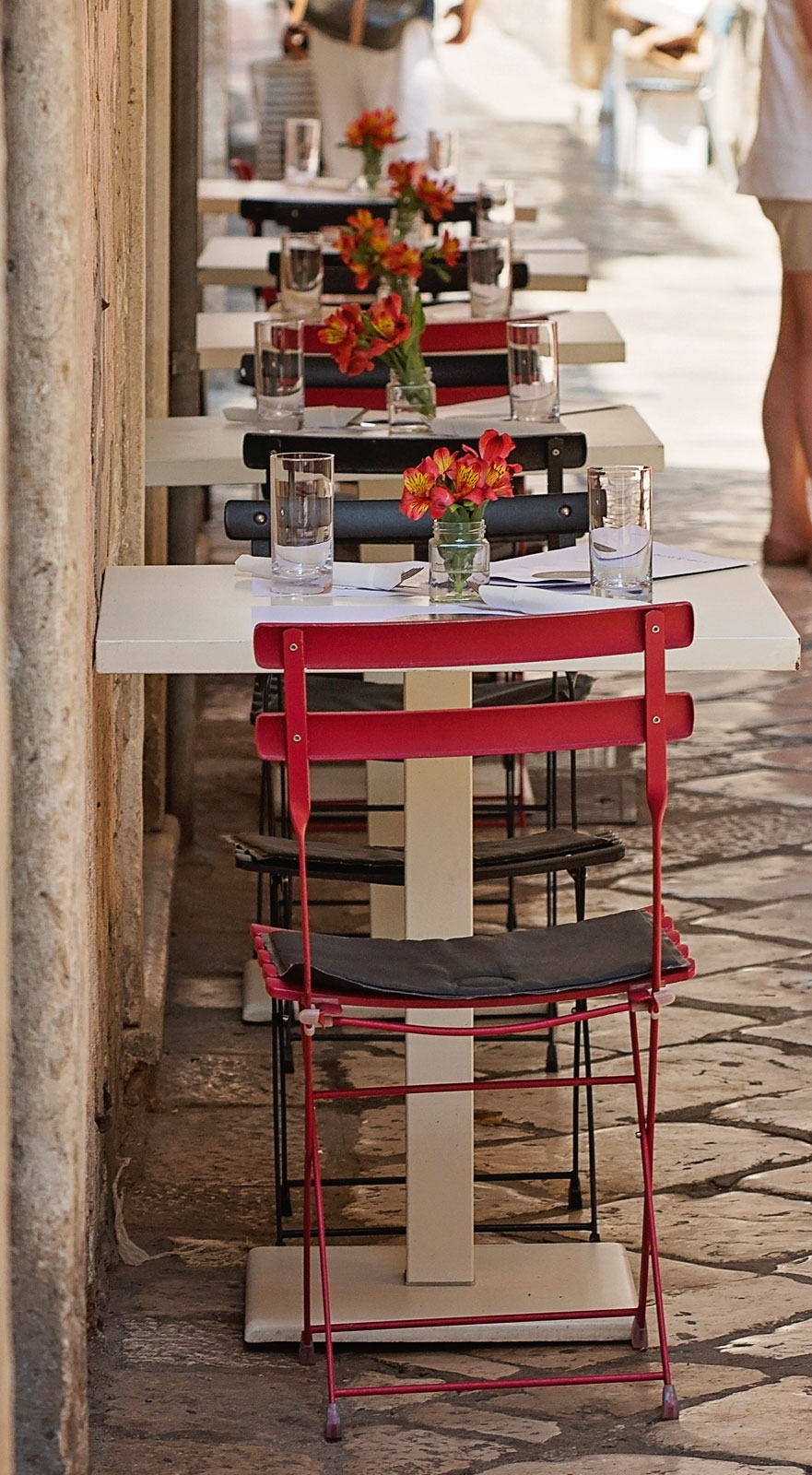 The seafood lover that I am, I chose a riblji restoran by the outdoor market. This allowed me to dine and people watch at the same time. I gasped at the prices on the menu but my stomach was already committed to this dinner. After confirming they took credit cards I was able to relax a little. Since Dijana didn't take credit cards for the room I needed to hold on to my cash.

The waitress brought me huge plate of black seafood risotto and mineral water. It gets its black color from adding squid ink. It was fresh and tasty and I ate every last bite.

Anxious to get moving I handed my credit card to the waitress as she passed by. She shook her head and said, "No Visa". So when I asked if they took credit cards I should have been more specific. They took all credit cards EXCEPT Visa. This didn't make much sense to me and it wasn't the last time I would run in to that in Croatia.  My cash situation just became a bigger issue.

It was getting late and I wanted to book an island tour for the next day. At the harbor there were several tour companies competing for my business. I chose an all day tour to the Elaphite Islands that served a fish dinner on the boat. When I asked how much the man said, "250 Kuna...I mean 300 Kuna". Maybe he really forgot how much his tours were, maybe not. But always remember, EVERYTHING is negotiable in Croatia.

When I pulled out my credit card guess what he said? That's right, they didn't take credit cards. He agreed to take a small cash deposit to hold my spot.

After finding an ATM and getting my cash situation under control, I realized how tired I was from 10 hours of walking and climbing steps. I exited through the fortress walls and made my way back to my room in the hills. It was a straight climb up 340 stone steps. At one point, I could hear my heart pounding in my ears and I had to sit down for a rest.

When I made it back to the bed and breakfast and looked out at my views I knew the suffering was worth it. I brought my laptop out on to the balcony and reviewed my photos as the sun set over Old Town. It was my own little slice of heaven and I couldn't wait to see what day 2 had in store for me.